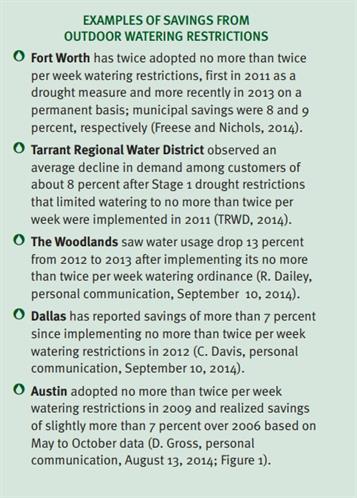 Water restrictions tend to come about as drought ordinances only, but many communities have come to adopt them as a year-round protocol. The cities and towns that have adopted these policies have been reporting large amounts of water savings. These drought water restriction policies are usually paired with the time of day restrictions for watering as well. These policies also tend to ban wasting water through things like runoff or watering impervious cover. There are many cities that have adopted the twice per week watering limit that has produced great results.

Fort Worth adopted this restriction in 2013 and has seen 8-9% water savings. The Woodlands observed water usage decrease by 13% when implementing their water restrictions. Dallas implemented a twice per week watering ordinance and saw a decrease in water usage by 7%. Austin did the same and also saw more than 7% of their water usage conserved. When the drought was bad in Austin in summer 2012 and summer 2013, they enacted a once per week drought water ordinance and saw an even greater increase in water savings. These ordinances may seem like a nuisance, but rest assured they are helping to conserve water.

If you’re struggling to get your irrigation on the right schedule for your municipality, call Conserva Irrigation of North Houston today at (281) 843-8465. We can come out and set your timer, we also offer upgrades, retrofits, repairs, and inspections to help make your sprinkler system more efficient.We look forward to hearing from you.